It appears to the eye as a traditional farmhouse, instead contains a beautiful example of water mill, an ancient medieval structure for the milling of cereals, carefully restored, that after centuries is still working to offer even today its higher quality artisanal flour.

The Medieval Mill of Renzetti is the only mill, in the Upper Tiber Valley, and one of the few at least in Italy, that still in perfect working order and that has not undergone any change respect to the machine built about seven to eight centuries ago, in fact, there is reason to believe that, also for socio-cultural diffusion reasons, its origin can be dated in the early ‘200.

Ever since its memory, it is owned by the Serafini family, historically one of the main millers families in the Upper Tiber Valley, which continues today with the Piergentili heirs.

He survived the advent of industrial mills thanks to Adelmo Serafini, Annibale Piergentili and Ermanno Piergentili who kept him alive with all their strength for almost a century, and especially that century, the ‘900, when all the other mills have undergone any kind of change, from the use of metal shovels to the assembly of electric or burst engine, to try to survive the industry, until to the complete dismantling in almost all cases. 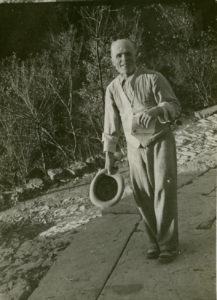 Adelmo is the one who kept the mill until the aftermath of the war, when the crisis of these ancient mills was already strong, which he suffered a lot, and then left us in 1954.

And so to take charge of the mill was Annibale, husband of the Adelmo’s daughter, Elda.

“Nino”, as was called by all, managed to keep alive the mill’s activity also thanks to collateral activities such as the selection and cleaning of seeds for many farmers in the Upper Tiber Valley, using another historical machinery, the cylinder sifting , called “the Cylinder”, and thus always have the highest quality seeds. 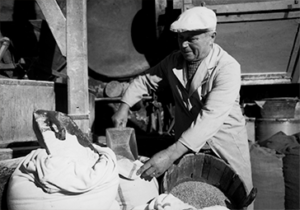 He had to cease the sale of food flours during the ‘80s, when the production license was denied to the mills like this (while in countries such as the Netherlands already funded the recovery of historic mills), to continue the production of flours for zootechnical use, especially with the recovery mill.

By the end of the 18th century, downstream to the original production unit of the medieval mill, a second mill was added, called “recovery mill” because it does not have its own connection with the river but is built exclusively to exploit the water coming from the upstream mill; it is quite similar to the first but mainly dedicated to milling cereal for livestock.

It has been working until the early ‘90s, when Nino was forced to cease production following the construction of a new bridge by the Common of San Giustino, which destroyed almost all of the dam, making it impossible to use (it is currently under restoration for restarting of the production and used for educational and tourist visits purposes). 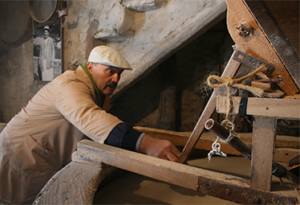 The “Ultimate Miller” continued to grind, though for family use only, until he left us in 1994.
Since then, the great passion and care of the son Ermanno has made the mill stay perfectly working and with the original materials, knowing the sunrise of a new millennium. For more than 20 years he spent his free time in maintaining the mill and its water system, making it always available to show it and explain it to students and enthusiasts, without even imagine that better days would be back for this and other mills. 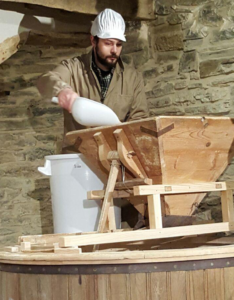 During the 2000s  however, things began to change; many people have understood the importance of a healthy eating, unfortunately also because of health problems due to the massive use of fined flours, and so in 2010 the right conditions were created and restoration work started; so was opened for Stefano, Ermanno’s son, the possibility of resuming the family’s activity at the end of the restoration work in 2016.

It is a fine example of horizontal wheel water mill, called “whit ritrecine”.

The “ritreci” is the first mill of Mediterranean civilization, it seems invented by Greeks around the second century BC and then spreaded in Italy by the Greek colonies.

The mill is in fact a very old invention, but does not take off quite up to the eleventh century, that is until there was a great availability of muscular energy (animals or more often slaves).
Pliny the Younger, in the first century A.D. talks about water mills in Italy, which would then spread throughout the empire.
It is certain, however, that the capillary diffusion of these implants is due to the intervention of rural lords and the monastic orders.
Numerous historical documents show that there are water mills in the Upper Tiber Valley at least since 1048; and since the late Middle Ages, especially since the end of the twelfth century, there was a considerable spread of numerous water mills, not only in the larger and rich towns of the plains, but also in the small valleys between the mountains.

Their spread is also due to their nature; these mills in fact can run even where the rivers have a limited water flow because their operation consists in divert a portion of water from the river thanks to a weir, channeling it into a stream (the “Reglia”) to bring and storing it into the dam behind the mill (the “Bottaccio”) and then exploit the potential of this reserve.

From the base of the front wall of the “Bottaccio”, a conduit leads the water to the cave beneath the mill (where there is the shaft with spoon blades) which thanks to the altitude difference and its cone section gives the water enough pressure to let the mill run.

The horizontal wheel mill consists of two horizontally placed millstones, one above the other; the lower one (called as “the sleeper”) is fixed on the raised shelf where the mill is mounted, the upper one (“the spinner”) rotates above the other one allowing the crushing of the grains, and so obtaining the flour.
The upper millstone is connected in direct drive with the shaft with spoons (the impeller), placed in the cave below the mill and so the milling getting started when the water hits the spoons, putting in rotation the upper millstone.
The wheat is placed in the hopper placed above the millstones and, falling into the hole at the center of the upper millstone, is then distributed into the space between the two millstones and then exiting, in the flour form, in the frontal container (the “Cotina”) where it is picked up. 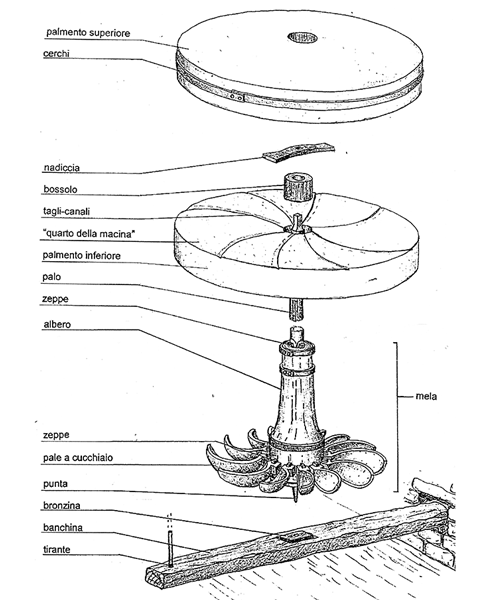 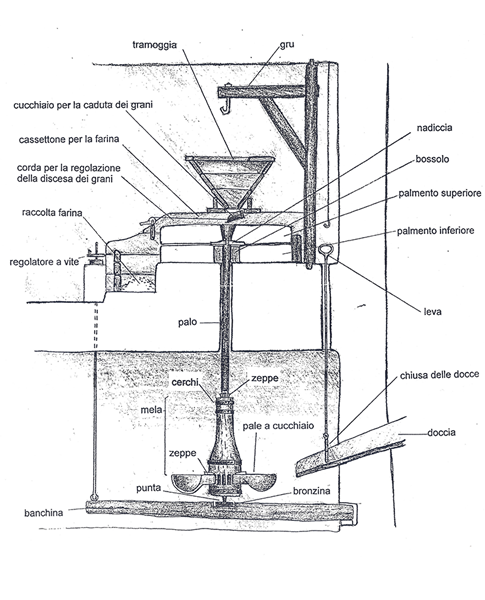 The Medieval Mill of Renzetti, located in the borough with the same name, placed among the Apennines, in a side valley of the Upper Tiber Valley: the valley of the Lama river.
From the orographic point of view, the valley of the Lama torrent starts from the village of Colle Plinio, site of the important “In Tuscis” villa of Pliny the Younger and it develops dividing into the three valleys that lead to the Apennine passes at the inhabited centers of Passano, Cantone and Parnacciano.

It was a landmark for many inhabitants, not only of the villages but of the Upper Tiber Valley in general, as well as for foreigners and pilgrims passing by, using the neighboring passes of the Apennines. Certainly it was for the Maremmani shepherds who, after staying at Colle Plinio, from here passed through to the Marche, during their famous “transhumances”.

The valley of the Lama river has been used since the time of the ancient Romans as one of the main ways to reach the Marche, and therefore the sea, because it rises gently to the passes, which in this point of the Apennines are particularly low, making easier the travel.
The mill is located on the ancient medieval road, the only road existing until the beginning of the 20th century to reach the passes near Cantone and especially Parnacciano.

It ‘a witness of those facts the medieval bridge located in front of the mill, which was, until the early 90s, the only access road to the borough of Renzetti, until it was abandoned in consequence of the construction of a new cement bridge within not even ten meters distance by the Common of San Giustino.
It is still visible today thanks to Ermanno Piergentili that (in addition to saving the mill) in 2015 has taken charge of its management and has made possible to restoring and safeguard work thus allowing pedestrian use of the old bridge for those who visiting the mill.

Around the mid-1900s in the municipality of San Giustino there were 5000 inhabitants and 26 working mills; In Umbria there were about three hundred mills; in a little more than half century they have gradually disappeared in the silence and total disregard.
In the Upper Tiber valley all have ceased their activity except the Mill of Renzetti, which still grinds just like its origins.

The high productions of industrial cylinder mills and the introduction of electricity as a driving force demolished the resistance of the millers and supplanted all hydraulic turbines. Instead of many mills scattered in the area, few were built with greater yields in the major fractions that seriously affected the quality of the product and human health.

And so, the mills have finally come to terms with another possible product of hydraulic energy: electricity. In the Lama river there is evidence of a stage of the pre-technological era with the still visible remains of the water mills and the end of this period with the ruins of two electric power plants built in Colle Plinio and Ripole. The latter have ceased production with the nationalization of electric power at the end of the 1960s. 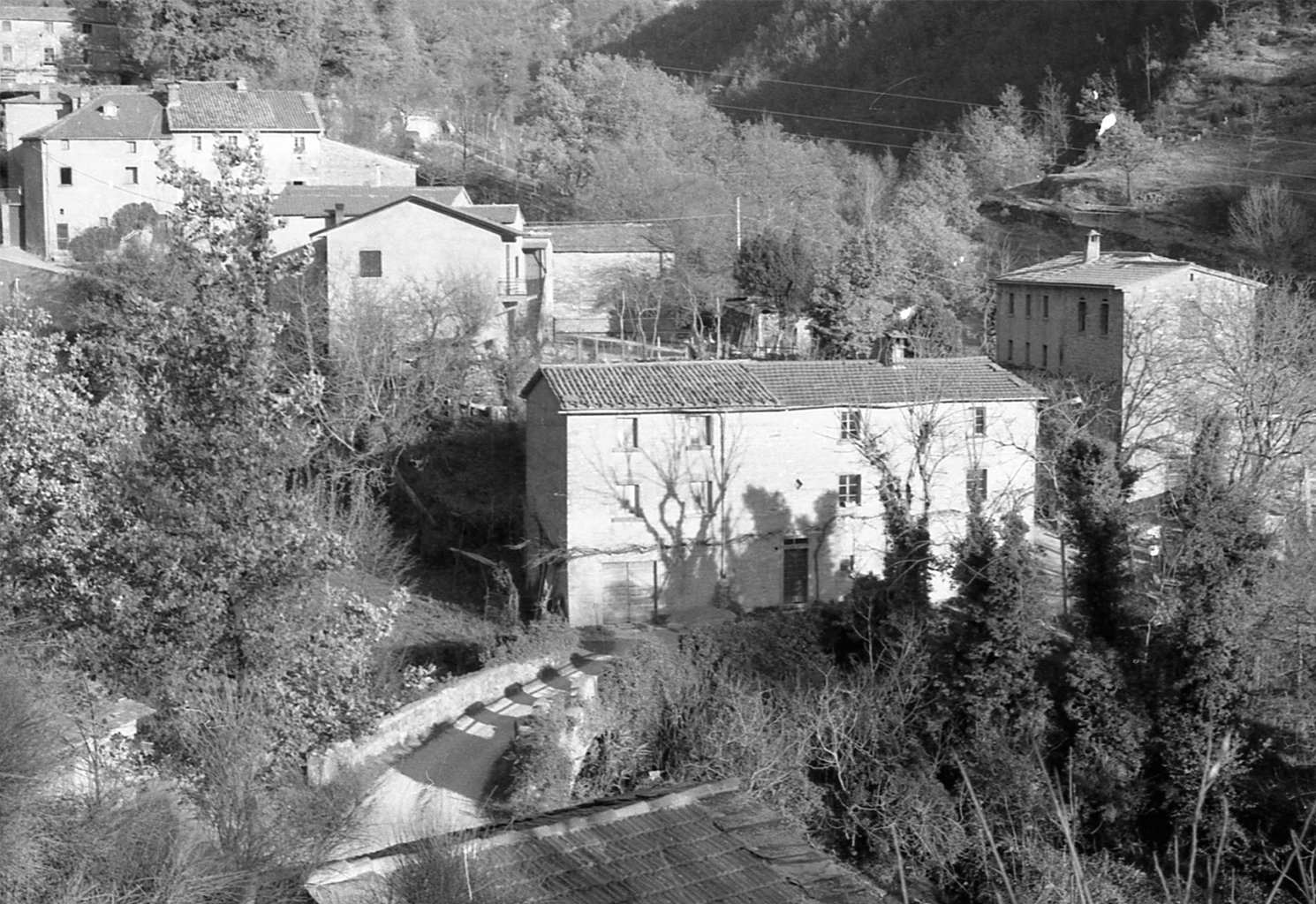 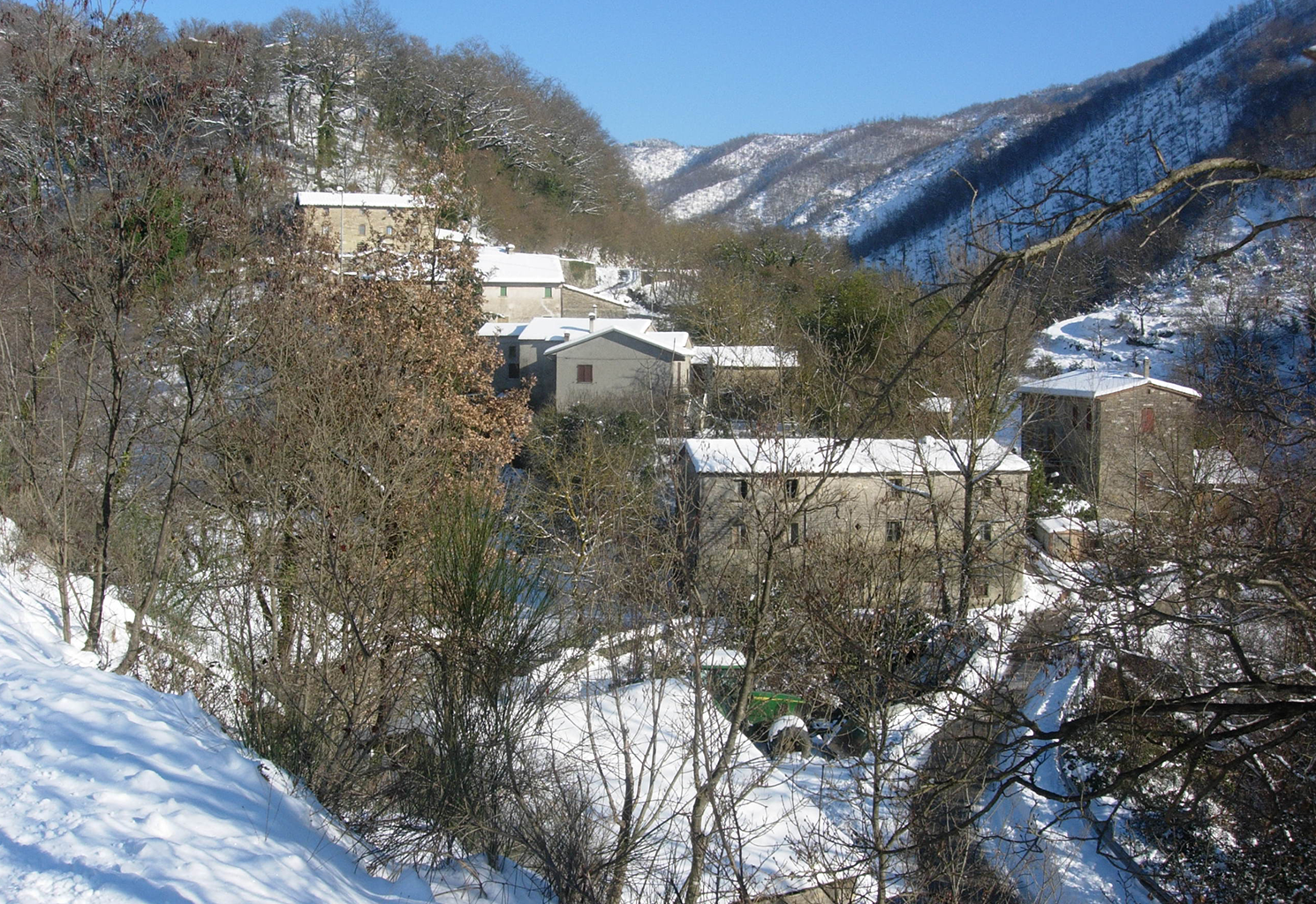 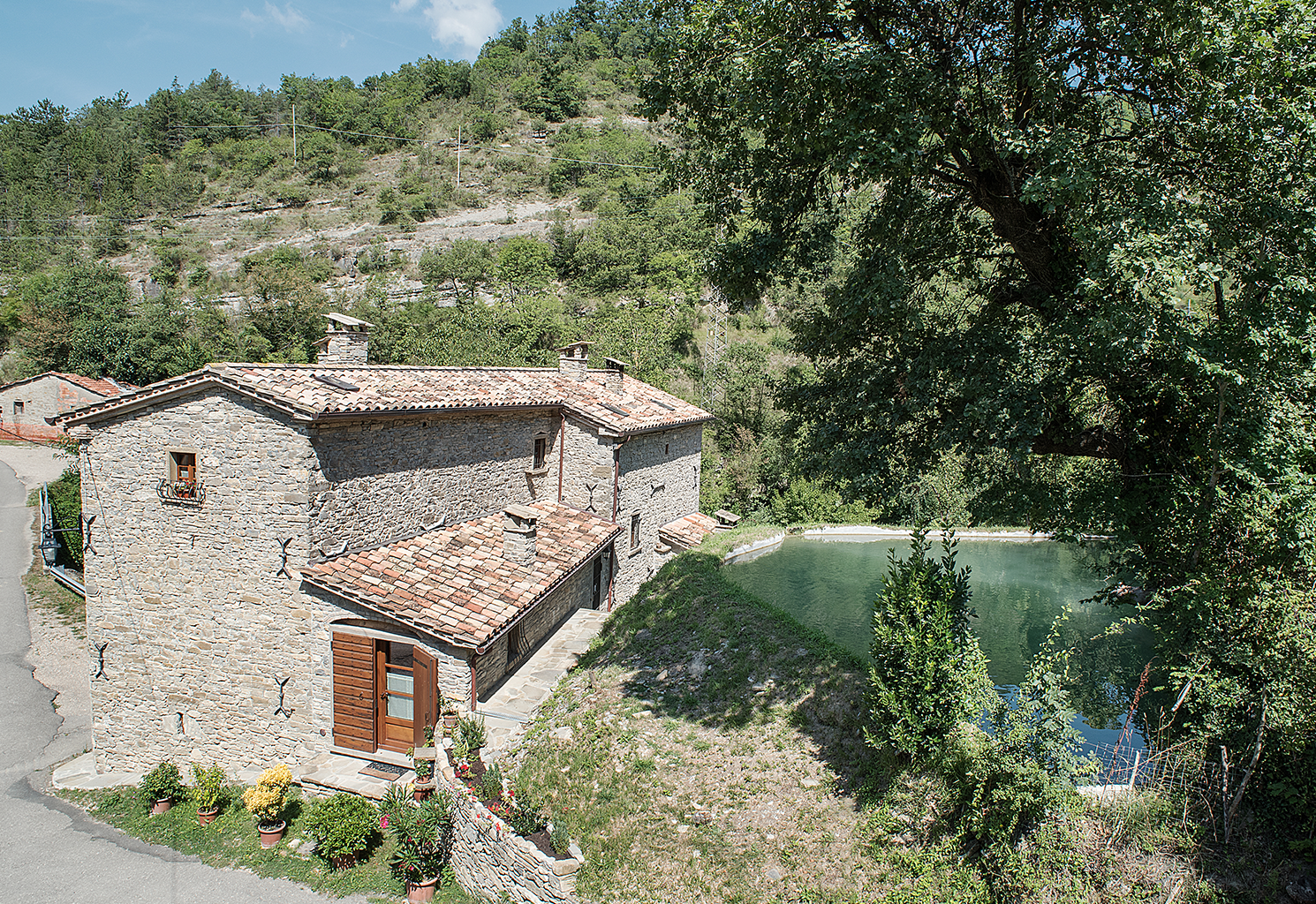 Passionate, curious, tourists and scholars are invited to visit this exemplary site to keep alive the memory of rural life and to support a policy of recovering and protection of these structures, real museums in the area. But perhaps it is difficult to consider as a cultural asset a “rough” plant like the mill, even more if it is not marked by the ancientness which here, however, does not lack.

Annibale Piergentili had an important insight, already in the 80’s:
“The Last Miller” with its mills and places rich in history and traditions must be at the disposal of the community to give new life to these ancient plants, to continue to tell stories of water and flour, to return into the nature even for a couple of hours: the time of a grind, a walk and above all a flurry of memories to keep alive one of the many, too many, “Historical Memories” that in Italy we are leaving go lost, forever!